08 December 2016
Share
Share Facebook Share to Twitter Share to Email
Goodstart works with many groups in the early learning sector and beyond to shine the spotlight on the importance of quality education in a child’s first five years, and continues to lobby governments to improve childcare affordability and accessibility through greater investment. In the series of stories on our friends in the sector, we continue our chat with Early Childhood Australia (ECA) CEO Samantha Page. Read the first story here.

Last week ECA CEO Sam Page highlighted that governments taking inadequate action could be a barrier to achieving better learning and developmental outcomes for children from birth to five years.

She said they believed they were addressing the issues, but there was so much left to be done.

“If unintended consequences of government policies result in parents being unable to afford to send their children to early learning, then our participation rates will go backwards,” Ms Page said.

Ms Page said to understand the cost to benefit ratio of investment in early learning, we could turn to Nobel Laureate economist James Heckman.

“His US study calculated there is a seven to 10 per cent per year return on investment for children who receive pre-school education,” she said.

“His compelling graph shows that investing in early learning provides the highest rate of return. It is more effective and efficient than investing in human capital later in life.” 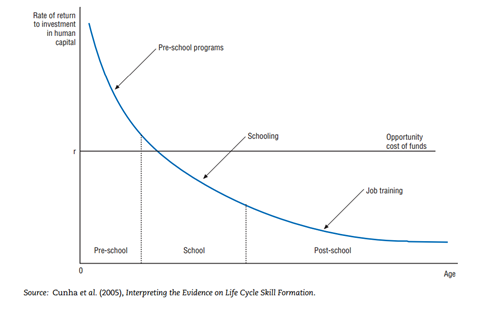 When rebates are factored in, Australia’s spending approaches 1 per cent of GDP, this does not compare well with Scandinavian countries such as Denmark, Iceland and Sweden where spending is between 1.6 to 2 per cent of their GDP – the highest investment in childcare and pre-primary education in the world.
She said all Australians stood to benefit from greater government investment.

“Improved outcomes for children flow on to huge economic and social benefits for all of us,” she said.
“Children who get a good start to their education can develop the expertise and skills to become productive members of the workforce and contribute to society.”

The Early Learning Everyone Benefits campaign seeks to increase public awareness and understanding of the benefits of investing in early learning for Australia’s future prosperity and secure political commitment to increase access to quality programs that amplify children’s development.